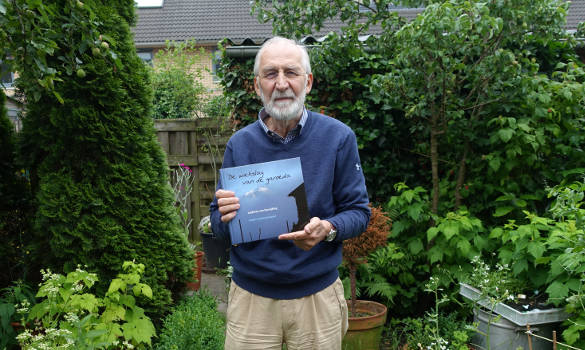 Jan Willem van Ee with the Dutch edition of the Garuda

Announcing Flight of the Garuda

A new English adaptation that you can read and study, irrespective of religious, social or whatever background

News: Flight of the Garuda is released on Amazon.com. The price is about US$ 9.50

This is the link to Amazon.com

This website is to introduce a new English adaptation of Flight of the Garuda by Zhabkar Tshogdrug Rangdrol (1782-1851). This adaptation is made from the original Tibetan text by Jan Willem van Ee from the Netherlands. This English version will be publishedon Amazon Kindle in electronic form only . The date of publication will be about 15th of December 2016.

Flight of the Garuda is originally a high Buddhist text. But it is my firm belief that this text is perennial wisdom that can be read and studied with much profit, so to speak, by non-buddhists, i.e. also adepts of all other religions, including atheists and agnosts. Because this is a strong claim that probably goes against Buddhist susceptibility – and I therefore admonish you not te believe me on my word – this site aims to introduce you to a new way of thinking about religion and religious texts. My argument is explained in depth in the Clarification. Of course a Buddhist adept also may read and study my adaptation, because in no way I have violated the Buddhist content. I only propose to look at it with a different frame of mind.

In the sommer of 2016 I have published the Dutch adaptation of this text. The reactions are overwhelmingly positive; you can read what others say about it HERE. By the way, with ‘adaptation’ I mean that I have translated the text as literal as possible, but that I have on some places diverged from the literal, for instance when the literal translation of a word is difficult to understand, or asks for much explanation, while another English word perfectly conveyes the meaning. In other instances I have  inserted words, or even a line now and then in order to make the shorthand that Zhakar writes better comprehensible. Furthermore, my understanding of liberation and of religious texts is different from the mainstream religious understanding. More about this you will find in the Clarification, especially in the part that is published on this website.

When I made the Dutch version I discovered that my adaptation greatly improved by making a separate English version alongside. So the English version is not a translation of the Dutch one. It is made separately, and while being very alike on some points, it is differing on others, because the English language, being very versatile, makes it possible to make other connections in understanding of the text.

The training of the mind means that you will learn to understand how your mind works. This is Zhabkar’s starting point Zhabkar in writing the Garuda. This text by the famous enlightened vagrant Tibetan monk Zhakbar shows how you can train in order to see that Nirvana is already here and now, and not somewhere else, far away. Jesus expressed the same when he said that the Kingdom of Heaven is within us and around us. Other wisdom teachers also say this, but they mostly fail to show how. Zhabkar hwoever fulfils his promise.

Althought this text is of Buddhist origin, you can read it as perennial wisdom, wisdom that transcends the imagined orders of Buddhism, Christianity, and whatever religion, or non-religion, like atheism. Being or not being a Buddhist believer does not matter in reading and understanding, and making real in experience what Zhabkar offers. Becaue the text is original Buddhist you have to read around some Buddhist terminology and names. This is simple and when needed there are endnotes. Moreover this text does not elaborate on Buddhist doctrine. So, be not afraid of some delving into the Buddhist religious doctrinal play.

The book has a short introduction, then the adaptation of the Tibetan text with notes. Then an essay with the clarification of my view on the text, with an introduction to the Buddhist worldview, needed in so far as to understand Zhabkar’s point of view. There are a few pages on linguistic points and a list of special words. On paper it is about 140 pages.

To get the gist of it I have published some songs and a part of the clarification on this site.

If you have questions, or remarks, please send an e-mail through ‘contact’ or to vanenos@gmail.com

The Garuda and Conflict

Mushrooms in autumn, Doorn NL The Garuda and conflict The world seems full of [...]

It all changes; the past also?

Seqoias in Lady Bird Johnson Grove, CA It all changes; the past also? Lately [...]